You are here: Home / Archives for Technology

The vulnerability was discovered by Jouko Pynnönen.
An overview from Jouko’s website.

Current versions of WordPress are vulnerable to a stored XSS. An unauthenticated attacker can inject JavaScript in WordPress comments. The script is triggered when the comment is viewed.

If triggered by a logged-in administrator, under default settings the attacker can leverage the vulnerability to execute arbitrary code on the server via the plugin and theme editors.

Alternatively the attacker could change the administrator’s password, create new administrator accounts, or do whatever else the currently logged-in administrator can do on the target system.

This is part of a regular series of Google Apps updates that we post every couple of weeks. Look for the label “Google Apps highlights” and subscribe to the series. – Ed.

Over the last couple of weeks we rolled out some nice updates in Gmail, improved on Google forms, added new mobile device security features and celebrated many new applications recently added to the Apps Marketplace. Enjoy!

Rich text signatures in Gmail
You’ve been able to add plain text signatures to your messages in Gmail for some time, but last Thursday we stepped it up a notch by adding rich text signatures, one of our most requested features. Now you can create signatures with different fonts, font sizes, font colors, links and images. The feature also supports different signatures for different custom “From:” addresses that you’ve configured. Head over to the “Settings” page in Gmail to get started. 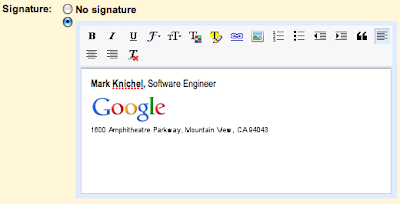 HTML5 features in Gmail on Safari
Gmail has recently added some new interactive features, like drag-and-drop attachments and images, and new windows that “outlive” your original Gmail window. These features are possible thanks to HTML5, but until this week, Safari users have been left out. All of that changed on Monday, and users of Safari 5 can now enjoy these helpful HTML5 features, too.

Simpler page navigation in Google forms
With Google forms (part of Google Docs), you can quickly create and send surveys to your contacts or publish surveys on the web. We started out offering simple one-page forms, but last week we made some big improvements to our logic branching capabilities. Now you can easily create multi-page surveys that adapt depending on how people answer your questions. Try it out for yourself in the form-based choose your own adventure game that we built. 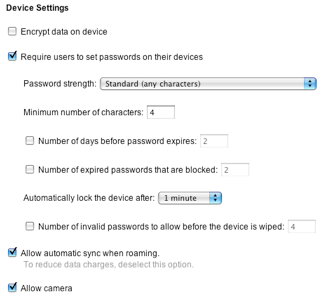 Apps Tuesday: 10 new additions to the Apps Marketplace
Some technology companies burden IT departments with software patches and fixes every month, but our cloud computing approach means that customers get improvements automatically with Google Apps. In addition to all the new features built by Google, this month we added 10 new applications from third-party software companies to the Apps Marketplace. Third-party apps integrate seamlessly with Google Apps and can be activated by administrators with just a couple clicks.

Who’s gone Google?
More and more organizations are getting with the times and switching to Google Apps. Today we welcome Vektrex, Rypple, XAOP, Limbach Facility Services, Riley Chartered Accounts and tens of thousands of other businesses worldwide that have moved to the cloud with Google since my last update here.

More universities are preparing to reopen their doors in the fall with new campus technology tools, too. We’re excited to have University of Minnesota College of Liberal Arts, Universitat de Girona in Spain and The College of St. Scholastica join us!

I hope you’re making the most of these new features, whether you’re using Google Apps with friends, family, coworkers or classmates. For more details and updates from the Apps team, head on over to the Google Apps Blog.